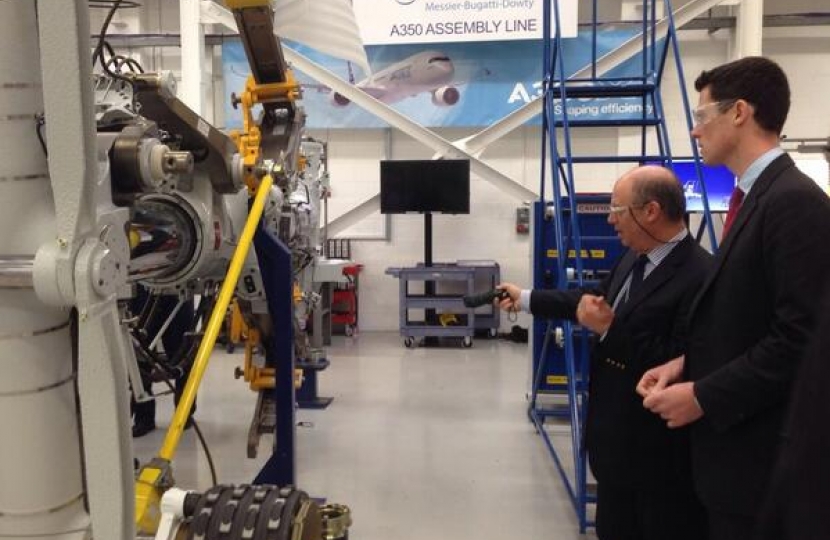 In and around Cheltenham we have a number of businesses that we can be incredibly proud of, from large industrial manufacturers who export to markets across the world to local independant shops. These businesses make Cheltenham a great place to live and keep our local economy moving.

However, some of these businesses are still struggling despite the economic upturn. Local traders are concerned with issues from business rates to parking. Meanwhile, businesses wanting to start up in Cheltenham complain that the town does not provide enough office or retail space.

I want to change this. I want to help make Cheltenham as business friendly as possible so that we can carry on creating new jobs for our young people.

When our local businesses thrive, so do our employment figures. On 20th January 2015, the House of Commons Library published the new employment figures- and I am delighted to say that the news is good for Cheltenham. The total number of unemployed claimants in Cheltenham in December 2015 was 655; a rate of 1.2% of the economically active population aged 16 to 64. By way of comparison, the national average is 2.4%.

The total number of claimants (both Jobseeker's Allowance and Universal Credit) is 199 lower than in December 2014 and 52 lower than in November 2015.

This further drop in unemployment is very welcome news. But with the sun shining, we need to get on with fixing the roof. That means publishing a long-term economic plan for Cheltenham to generate the local jobs of the future in all sectors; from retail to cyber.

I am also actively promoting Cheltenham as a Cyber Innovation Centre. In November 2015, after heavy lobbying from me in Parliament, the former Chancellor of the Exchequer, George Osborne, announced that Cheltenham had won the race to be designated as one of just two national cyber innovation centres. This is excellent news for our town. It will usher in a local digital ecosystem, generating employment opportunities for our young people and nurturing the hi-tech companies of tomorrow. I will push for the earliest possible launch of this exciting initiative.

Alex Chalk has welcomed recent figures showing that unemployment has dropped to its lowest national rate since 2005, with 2.5 million more people across the United Kingdom back in work having the security of a regular pay packet than in 2010.

Cheltenham's MP, Alex Chalk, has welcomed the latest fall in local unemployment, as employment levels across the UK reached another record high.

Alex Chalk MP has welcomed new figures for Cheltenham which show that further cuts to income tax announced this week by the Chancellor will take an estimated  2,259 low-earners out of paying income tax altogether, as well as reducing income tax for 53,163 people, helping working people keep more of what they earn.

Chalk welcomes figures showing another fall in unemployment in Cheltenham

Cheltenham's MP, Alex Chalk, has welcomed the latest unemployment figures released by the ONS, showing that there are 228 fewer people looking for work in Cheltenham today compared to a year ago.