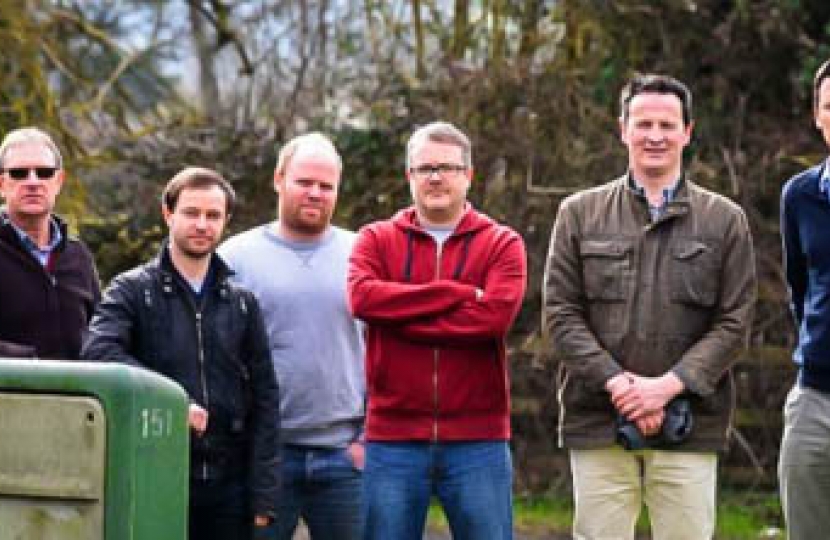 Before my election as MP in 2015, I promised to make broadband speeds a priority. Now standing as your Conservative candidate in the 2017 General Election, I have remained true to this promise and want to continue to raise your concerns in Parliament to ensure that Cheltenham does not miss out on broadband. Superfast broadband is vital for Cheltenham’s economic future, so it is only right that this is a priority. One of the ways I did this during my time as your MP is through my membership of the All Party Parliamentary Group for Broadband and Digital Communication.

Towards the end of my first year, I wrote to the then Chancellor of the Exchequer, George Osborne, to lobby for investment in the UK's broadband infrastructure. The letter, also signed by other members of the All Party Parliamentary Group for Broadband and Digital Communication, sets out recent figures showing that 17% of the UK population remains without access to superfast broadband, with 500,000 households still living without even basic broadband, with average speeds of less than 2MBs per second.

I joined my colleagues in welcoming the Government's commitment to this area over the past 5 years, which has seen over £1 billion invested and over 90% of UK businesses and residents now able to access superfast broadband, while highlighting the plight of the remaining households still struggling on snail-paced broadband speeds.

In order to tackle the problem, we are demanding that the Chancellor invests in creating 'one digital nation', by pumping further capital into the country's broadband infrastructure thereby preventing the digital divide between the 'e-rich' and the 'e-poor' from widening any further.

In October 2015, I welcomed Virgin Media's announcement that they would be investing in Springbank, an area that had previously missed out on the commercial superfast broadband rollout programme. Since then I have sought bespoke solutions across town from Grace Gardens in Benhall, to Old Farm Drive in Up Hatherley and the Bloor Homes estate in Pittville. Discussions with providers ranging from BT to Gigaclear are ongoing.

I am pleased that in Cheltenham we are better connected than most parts of the UK. However, there are still homes and businesses in our town which have missed out on upgrades, and I will continue to do everything I can to fight their corner. Following my broadband summit, I am delighted that Virgin have announced new network investment in Springbank. That is positive news, but I won’t let up until all Cheltonians get access to superfast speeds.

By way of background for this ongoing issue, back in 2011 Cheltenham suffered a massive 50% reduction in broadband speeds. Only Poole and Cromer experienced a bigger drop. Meanwhile Gloucester’s speeds actually went up by 21%.  In 2013, the percentage of the county’s households not receiving a 2MB average service was 11%, compared to just 5% in London. Gloucestershire had the 131st slowest average speeds out of the 202 areas.

Worse still, under Openreach's current development plans Cheltenham is set to lose out again to our county neighbours. The Government backed Fastershire Programme is designed to fill this gap, but black spots remain across the town, partly due to EU laws. State aid guidelines set out by the EU carefully govern the extent to which Government can intervene in markets with ‘commercial potential’, in other words those where it believes the private sector should be the provider of services.

Whereas many rural areas in Gloucestershire are not deemed commercially viable by broadband providers and therefore are eligible for state aid under the Fastershire scheme, many urban areas, including parts of Cheltenham, are stuck in limbo. These areas are technically ‘within the Openreach commercial rollout of fibre broadband’ and therefore the Fastershire scheme is not allowed to step in to fill the gap.

However, BT have decided not to include these areas in their superfast broadband rollout as they were ‘deemed to be not commercially viable’. This means residents like those in the Chargrove Lane area, where the Cheltenham 151 campaign group (http://cheltenham151.com) have been working hard to find a solution, are stuck in the middle with sub standard broadband speeds. Campaign groups have also been set up by residents living near the 209 and 214 cabinets.

Once the current BT openreach rollout scheme has been completed, the Fastershire group will be able to re-consider those areas which BT deemed not viable. This could offer a potential solution for problem areas such as Chargrove Lane, but this process wouldn’t be completed until 2018 at the earliest, meaning that Cheltenham residents will continue to lose out in the meantime.

We have a strange situation where in some cases rural areas are receiving better broadband services than urban areas. Without high-quality broadband, we as a town will find it harder to compete. Over time it will put pressure on businesses and jobs. So we must work together to find an immediate solution that works for Cheltenham. This is why I have written to BT asking them to explain their decision to exclude these areas from their commercial rollout and to look at potential ways to get around this problem. The current situation is simply not acceptable, but together we can change this for Cheltenham.

If you know of any particular broadband issues, please email me on alex@alexchalk.com

Gloucestershire County Council and Herefordshire Council have awarded a contract to BT Group to deliver phase two of the Fastershire broadband rollout in parts of Cheltenham and Gloucester.

Cheltenham's MP, Alex Chalk, has hailed the success of the long-standing campaign to end broadband blight for residents in Benhall. Earlier this year, the town's MP stepped in to broker a deal between BT Openreach and residents in Grace Gardens to upgrade their cabinet (209) to superfast fibre.

BROADBAND IN CHELTENHAM July 2016 update (19.07.2016)  This document, authored by Alex Chalk, is regularly updated to give residents in Cheltenham the latest news on Alex’s campaign to bring superfast broadband to all parts of the town, and to end ‘e-poverty’ in Cheltenham.

Cheltenham MP writes to Chancellor to lobby for broadband funding

Cheltenham's MP, Alex Chalk, has written to the Chancellor, George Osborne, to lobby for investment in the UK's broadband infrastructure, ahead of the Spending Review next month.

Cheltenham’s MP, Alex Chalk, has hailed as a “lifeline’’ guarantees won for Cheltonians living in so-called ‘‘e-poverty’’ at last week’s Broadband Summit. The summit was organised by Mr Chalk and attended by senior representatives from BT, Virgin Media and the Government-backed Fastershire scheme. It saw the town’s MP seek help for hundreds of Cheltonians who are struggling to get by on sub-2MB/second download speeds. Now Mr Chalk has won a pledge to help those worst affected, with the offer of satellite assistance.