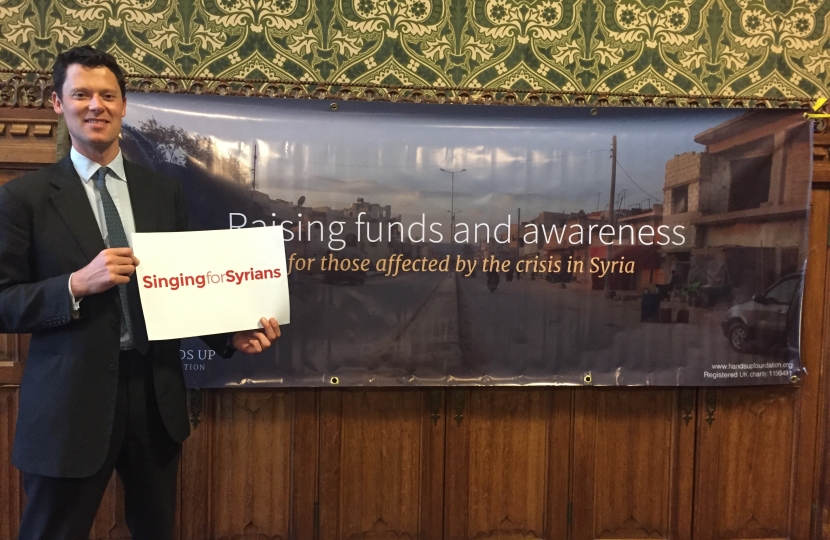 Last week, Cheltenham’s MP Alex Chalk joined fellow parliamentarians at the launch of Singing for Syrians 2016. At the event, Alex found out more about what they can do locally to encourage constituents to get involved in any way they can. Whether it’s organising their own event or even just passing a bucket around at a carol concert, every little helps.

The flagship Parliamentary concert will take place in St Margaret’s Church, Westminster on Tuesday 13 December 2016. All money raised will go to fund medical teams on the ground in Aleppo and to prosthetic limb clinics in the region. It is currently estimated that over 50,000 Syrians are amputees in urgent need of treatment.

This is Singing for Syrians’ second year. Last year, £90,000 was raised with the support of match-funding from the Department for International Development. Over 300 people came to St Margaret’s to sing carols and show their support. The need is even greater this year so it is hoped that this will become a nationwide initiative.

Alex commented: ‘Singing for Syrians is a fantastic initiative that I am very proud to support. It is a positive way of helping Syria’s most vulnerable people whose lives have been ruined by the civil war. Paying the salaries of the brave medical staff who risk everything to provide life-saving treatment is one way that we can make a real difference to the victims of this terrible crisis.. Singing together is a joyful way to express our solidarity and to take a hopeful stance against the horrors of terrorism.’