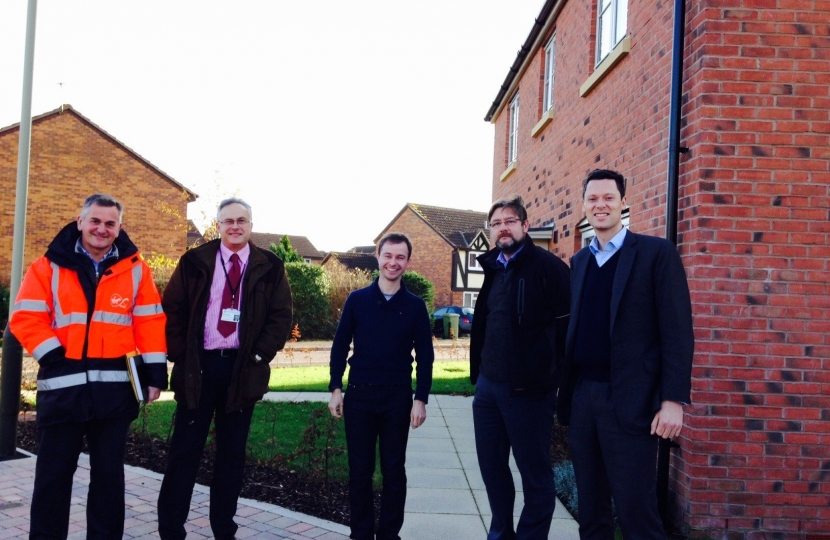 Cheltenham’s MP, Alex Chalk, has hailed as a “lifeline’’ guarantees won for Cheltonians living in so-called ‘‘e-poverty’’ at last week’s Broadband Summit. The summit was organised by Mr Chalk and attended by senior representatives from BT, Virgin Media and the Government-backed Fastershire scheme. It saw the town’s MP seek help for hundreds of Cheltonians who are struggling to get by on sub-2MB/second download speeds. Now Mr Chalk has won a pledge to help those worst affected, with the offer of satellite assistance.

2MB/second per second is the Government’s definition of basic broadband. At the launch of the superfast broadband rollout in 2012, the Government outlined its target commitment to ensuring 100% of the UK had access to basic broadband by the end of 2015 (the so-called ‘Universal Service Commitment’). Despite the Government investing £1.7 billion in rolling out superfast broadband across the UK, (including over £18m for Gloucestershire and Herefordshire matched by the Councils) with five months to go there are hundreds of residents across Cheltenham struggling on dial-up speeds.

Now the future looks brighter for those caught in what Mr Chalk has termed “e-poverty”. The local arm of the Government-funded scheme to back-fill areas missed out by the commercial broadband roll-out, Fastershire, covers Gloucestershire and Herefordshire. Following the MP’s intervention, Fastershire has now pledged to offer a subsidised satellite broadband service to residents who can show that their connection capacity is less than 2MB/second and who are not part of the commercial operators’ plans.

But the results of the summit went further. For those receiving speeds of between 2MB/s and around 8MB/s (i.e broadband but not superfast broadband) there was also positive news. At the meeting, both BT and Virgin promised to look again at those areas which have so far missed out on the upgrade to FTTC (fibre to the cabinet). Virgin Media have been buoyed by the injection of £3 billion of new funding through their ‘Project Lightning’ initiative, and have agreed to a further review of neighbourhoods previously passed over for investment, such as Grace Gardens in the Reddings.

Mr Chalk hailed the outcomes from the summit. He stated “This summit produced some really positive outcomes. For those in ‘e-poverty’ the commitment made by Fastershire is a lifeline for Cheltonians. It is absurd in this day and age to believe people can get by on dial-up speeds, and I am delighted that the end is now in sight for those affected.”

‘‘But 2MB/second should be a bare minimum. We need the maximum possible coverage of 30MB/s-plus superfast broadband. That’s why I’m delighted that areas missed out by BT and Virgin Media’s commercial roll-out are now going to be considered again for upgrade investment.’’

Commenting on the meeting, Matt Smith, Operations Manager at Fastershire said “Gloucestershire County Council have committed to 100% access to the Universal Service Commitment across the county. That commitment means everyone should have a connection that is at least capable of 2Mbps, if not all the time. We will support those who fall short. The most positive outcome of the meeting was the agreement by the commercial providers to review the potential to invest further in the Cheltenham area, as the injection of public funds should be the option of last resort”.

Paul Coles, BT South West Regional Partnerships Director, added: ‘’More than 50,000 Cheltenham households and businesses now have access to high-speed fibre optic broadband and, across the South West region as a whole, the number able to get this exciting technology is growing by more than 6,000 a week. BT is committed to making fibre broadband as widely available as possible – our investment in fibre broadband in the South West amounts to hundreds of millions of pounds - and we look forward to working with Alex Chalk to see how we can take coverage even further.”

To help residents check whether they are eligible for an upgrade from one of the commercial providers, or whether Fastershire will step in to assist them with satellite broadband, Mr Chalk has launched an online survey. Residents can fill in their address, postcode and phone line details. They will then receive an email back from Mr Chalk’s office in due course, informing them which category they fall into.

Residents can complete the survey by clicking HERE