Chalk presents Bill to Parliament to protect victims of stalking 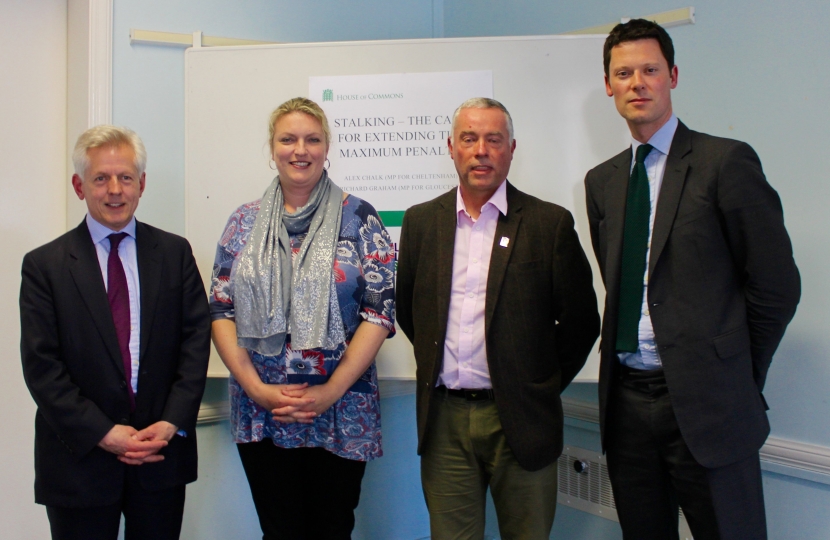 Cheltenham’s MP, Alex Chalk, has today presented a Bill before Parliament to strengthen protection for victims of stalking. The Private Member’s Bill, which has attracted cross party support seeks to double the maximum sentence for stalking from five to ten years’ imprisonment.

The town’s MP has been an advocate for stalking victims since his election in May 2015, and this is simply the latest step in a long running campaign led jointly by Alex and Gloucester’s MP, Richard Graham. Speaking of the campaign, Richard commented 'This is a step forward in highlighting to Parliament why the extension in sentencing that Alex and I are aiming for is so important – and the response of the House showed wide cross-party sympathy for our goal and this Private Members Bill.'

The campaign dates back to May 2015, when Alex learned of the harrowing case of his constituent and local GP, Dr Eleanor Aston. Dr Aston’s horrific ordeal at the hands of her stalker lasted over seven years and affected her to such an extent that at one point she had to leave work and developed Post Traumatic Stress Disorder.

When passing sentence on Dr Aston’s stalker at Gloucester Crown Court, his second such sentence, HHJ James Tabor QC stated ‘I feel it is wrong that I am not entitled to pass a consecutive sentence upon you. I am frustrated that the maximum sentence… is five years. I would, if I could, give you longer’.

Commenting on the Bill, Alex said ‘‘At the moment the law still stalking as a minor offence, and the maximum penalty is lower than for shoplifting. That needs to change. I want to stand up for my constituent, and people like her, so that courts can give victims of this dreadful crime the protection they deserve.”

The full link to Alex's speech can be found here.