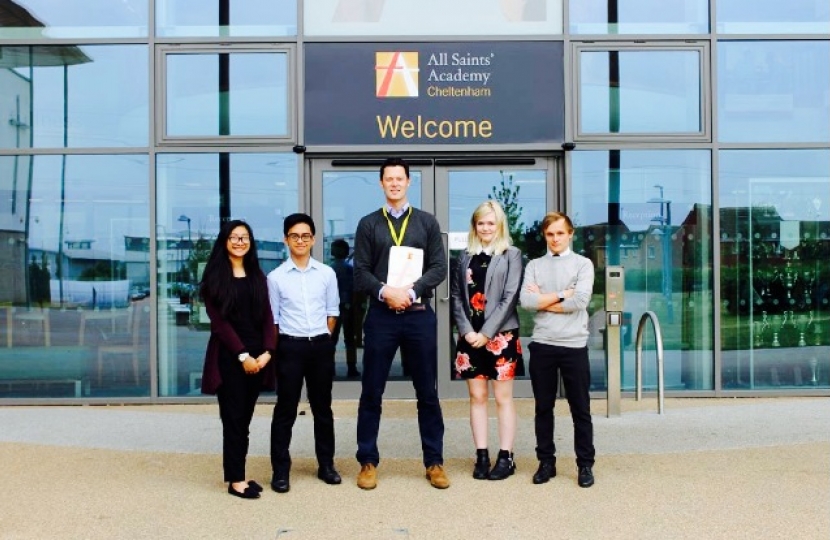 Cheltenham's MP, Alex Chalk, has taken up the fight for the town's underfunded schools in Parliament.

Cheltenham's schools produce some of the most outstanding academic achievements for their pupils, and yet are amongst some of the poorest funded in the country per pupil. The historic funding injustice  is reflected in cash allocations for Gloucestershire primary and secondary schools.

Since his election, Mr Chalk has become a prominent face within the so-called ‘F40' campaign group, which represents 2.5 million pupils studying in poorly funded education authorities.

Having raised the issue directly with the Education Secretary, the town's MP has now spoken out in a debate in the Commons organised by Liam Fox MP.

Intervening during the former Defence Secretary's speech, the town's MP stated ''Of course, it is not just about rural areas. Does my right hon. Friend agree that the time has come to end the historic funding injustice to schoolchildren in Cheltenham, an urban area; and that we need to give schools in effective local authorities, such as Gloucestershire, the fair enhanced funding that is no less than they deserve?''

Mr Fox strongly agreed with Cheltenham's man in Westminster, commenting ''That is exactly the point. One of the things we will be pressing the Government on in the next five years will be ensuring that we get our fair share. We want to make sure that we can reach our full potential economically, and no area in this country can reach its potential economically unless the next generation is given the appropriate education and the tools to advance in a meritocratic, open, pluralistic society.''

Speaking after the debate, Mr Chalk said ''This is an incredibly important issue for the future of Cheltenham’s children. It is about time our schools here in town got their fair share of funding. I'm delighted the Prime Minister announced last week that the £390 million of extra funding for underfunded education authorities will be incorporated onto baseline funding for future years. But I am determined to keep up the fight for a new national funding formula. We need extra cash for Cheltenham schools and a fair deal for local pupils.''