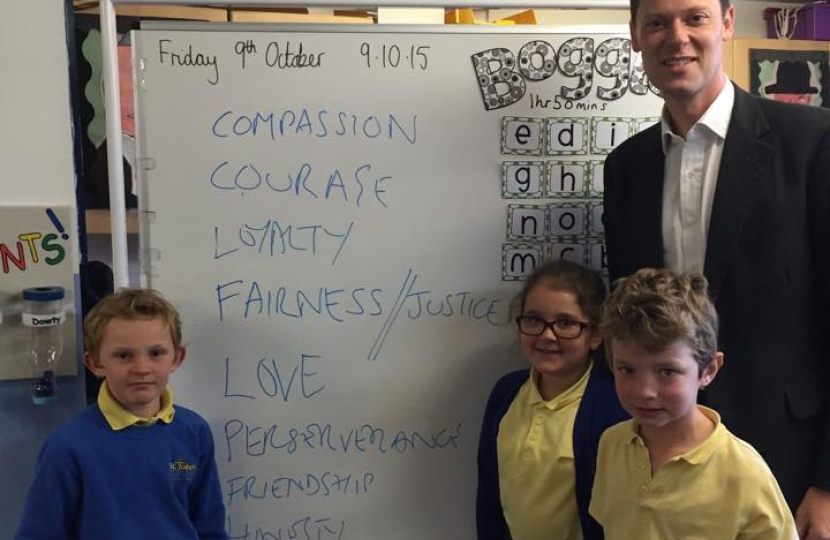 With the world going potty over Panama, I’ve been getting on this week with my campaign for the best possible funding settlement for Cheltenham’s schools. Getting this right is at the heart of what I want to achieve in Parliament. Perhaps more even than fixing the dreaded potholes…

That’s why I referred to the issue in my maiden speech a year or so ago, and have highlighted it again and again in Parliament over the last year.

In November I was delighted when after months of campaigning the Government agreed to ditch the old unfair formula which left Gloucestershire languishing towards the bottom of funding league tables. People said that this injustice was just too difficult to fix and that I was wasting my time. Well, that turned out to be wrong.
But the campaign must not end here. That’s why I have written to local schools and parents encouraging them to respond to the Government’s consultation (which closes on 17 April) and make clear the basis on which they feel the new formula must work. We have talked for years about the dream of a needs-led, activity-based, formula and this consultation gives our schools the chance to get it. I know how busy local teachers and parents are but I also know they won’t want to miss out on the chance to have their say.

Ok, I realise that schools funding may seem a slightly dry subject. But the fact is that local schools need this investment. I know the amazing things that they can achieve with it. The Government is protecting the overall schools spend, and announced a further £500 million of core funding to schools in the Budget. But we need to make sure as much as possible ends up in Cheltenham’s schools.

In other news this week, in addition to my surgery I met pensioners at the Gloucestershire Pensioners' Forum, visited Cheltenham’s excellent West End Partnership, met Barclays to discuss the possibility of bringing an ‘Eagle Lab’ workspace to town, visited the superb Aston project at Hesters Way police station, and attended a site visit at the derelict Springbank shopping centre to discuss regeneration solutions. And I also met Gloucestershire’s LEP to discuss the cycle lane plans from Bishops Cleeve to Cheltenham (good idea), and the Benhall bus lane (bad idea).

Details of the fair funding consultation can be found at
https://consult.education.gov.uk/funding-policy-unit/schools-national-f…