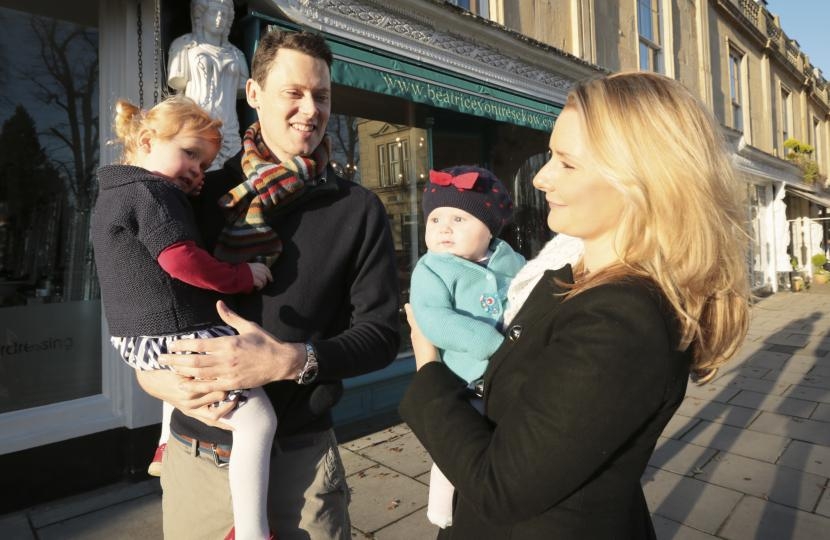 Cheltenham is Alex’s home town. He lives in Charlton Park with his wife and three children. Alex was brought up locally in Foxcote, just by the Kilkeney pub - a well-known landmark to many Cheltonians! His parents still live nearby.

Alex was educated at Magdalen College, Oxford where he read Modern History. Thereafter he attended City University, London where he received a Graduate Diploma in Law with Distinction.

Alex is not a career politician. Before his election he had fourteen years' experience as a barrister specialising in counter-terrorism, homicide and serious fraud cases. He appeared in many high profile cases which were widely reported in the media.

Alex was briefly a speechwriter for William Hague, then serving as Leader of the Opposition.

Since being elected in 2015 Alex has earned a cross party reputation as an independent-minded and thoughtful MP.  Considered as "up-and-coming" and a “rising star” of the 2015 intake, he is regularly described as one of Parliament’s “nice guys”.

As well as being a former member of the Justice Select Committee, Alex has regularly campaigned on issues including legal aid, the environment and cyber security. Alex launched his cyber vision for Cheltenham in 2014 and has since secured £23 million in Government funding for the Cheltenham Cyber Park.

Alex was also responsible for the Government’s commitment to the Net Zero carbon emissions target. In 2018, he tabled a Ten Minute Rule Bill seeking to enshrine in law that the UK reaches a net zero carbon account by 2050. Alex’s Bill received cross-party support and received Royal Assent in 2019.

As a backbencher, Alex alongside other MPs, including Richard Graham from the neighbouring Gloucester constituency, tabled a debate in parliament about stalking and sponsored a private member's bill, in order to raise the maximum sentence for stalking from five to ten years. In response, an amendment to the Policing and Crime Act 2017 raised the maximum sentence for stalking to ten years.

His involvement in further campaigns to address the issue of online radicalisation has seen the Government agree to toughen terror sentencing and increase protection for our police and security services.

In 2018 Alex led a Parliamentary inquiry, together with the Children’s Society and Young Minds charities, into the impact of social media and cyber bullying on young people’s mental health.  The findings, derived from the evidence of over 1,000 young people, are still receiving national and international attention. They have led to significant progress in this area, and Alex’s contribution has been recognised at the highest levels of Government.

In 2019, following months of campaigning - including a petition signed by 20,000 local residents - Alex succeeded in winning his campaign to save Cheltenham's A&E, after it had been earmarked for closure. Speaking at the Despatch Box in the House of Commons, the then Health Secretary announced "In light of the extensive representations made to me by my honourable friend (Alex Chalk) made regarding the A&E in Cheltenham, I have spoken to the Chief Executive of Gloucester Hospitals Trust and I can announce that Cheltenham's A&E will remain open and that no proposals to close the A&E at Cheltenham will be part of the forthcoming consultation."

Thanks to Alex’s campaigning, the town has won a series of major investments.  These include:

- £23million to develop Cheltenham as a national cyber centre; a vision first set out by Alex in 2014

- £500million to address the notorious A417 Air Balloon bottleneck

- £40million for Gloucestershire’s hospitals, including a £multi-million investment in Cheltenham General Hospital

During the pandemic, Alex was responsible for mitigating the impact of Covid-19 on the justice system – working to restart the courts system in a safe manner whilst providing ongoing support to the funeral sector, the legal sector and the charitable sector.

Alex was also responsible for helping to protect victims of crime, and during the COVID-19 crisis, he worked to ensure that victims of domestic could get legal remedies and protections that they needed, including injunctions, non-molestation orders and Domestic Violence Protection Orders.

Alex was also responsible for progressing the Domestic Abuse Bill through the Commons. For the first time in history, the Bill includes a wide-ranging legal definition of domestic abuse which incorporates a range of abuses beyond physical violence, including emotional, coercive or controlling behaviour, and economic abuse. The Bill also helps transform the response to domestic abuse by helping to prevent offending, protect victims and ensure they have the support they need.

In March 2021, Alex was appointed as Prisons and Probation Minister. In that time, he has announced that new prisons will be ‘net zero’ in future whilst also recruiting 1,000 new trainee probation officers – a record number for a single year in the history of probation. Alex also announced an overhaul of the unpaid work that offenders are ordered to do as part of community service so that the public can see with their own eyes that such punishments are tough and genuinely pay back to the community that has been affected.

In July 2021, Alex announced a groundbreaking new scheme to provide temporary, basic accommodation to prison leavers for twelve weeks in an attempt to cut crime by reducing the number of prison leavers ending up homeless so that they have the foundation to get a job and access treatment for addictions.

Offenders’ movements are mapped against acquisitive crimes being investigated by the police, enabling the police to rule them in or out of an investigation and providing a powerful deterrent against reoffending.

On 16 September 2021, Chalk was appointed as Solicitor General for England and Wales. After his appointment, he became a Queen's Counsel and was officially sworn in on 23 September 2021.

As Solicitor General, Chalk sought to ensure that criminals receive custodial sentences that appropriately reflect the nature of their crimes. He has referred a significant number of cases to the Court of Appeal under the Unduly Lenient Sentence scheme, securing enhanced sentences against more than 15 serious offenders in his first 3 months in the role. On average, these offenders have been handed down an enhanced sentence that is 64 percent longer than the original sentence they received. These offenders include Milad Rouf, who threw acid in the face of a former partner, James Clarke, who murdered a 39-day old baby, and Christopher Appleby, who sexually abused three girls over a period of 15 years.

In January 2021, a Neo-Nazi terror offender was sentenced to an immediate prison term after Chalk personally presented the case on behalf of the Government at the Court of Appeal.

Ben John, aged 22, was in possession of tens of thousands of politically extreme and far-right documents and files, including white nationalist and anti-Semitic materials.

He was also found to own a copy of ‘Anarchists Cookbook’, a book containing instructions for the manufacture of explosives and rudimentary weapons. In August 2021, John was given a suspended sentence.

Following Chalk's presentation in court, the Court of Appeal increased John's sentence to 2 years’ imprisonment with a 1 year licence period.

As Solicitor General, Chalk oversaw the Serious Fraud Office and sought to ensure that the SFO is effective in tackling fraud, bribery, and corruption. In one case, the SFO secured convictions against Petrofac LTD for bribery, with the energy firm fined £77 million as a result. This is the single largest penalty for a conviction under the Bribery Act since its introduction in 2010.

Chalk championed a variety of causes during his tenure as Solicitor General. He was an ardent supporter of the government’s strategy to tackle Violence Against Women and Girls (VAWG). He sought to improve the criminal justice to rape, overseeing the implementation of Operation Soteria, a new policy that directs the police and Crown Prosecution Service to focus investigations on suspects rather than complainants’ credibility.

In October 2022, Chalk was appointed as Minister of State at the Ministry of Defence.