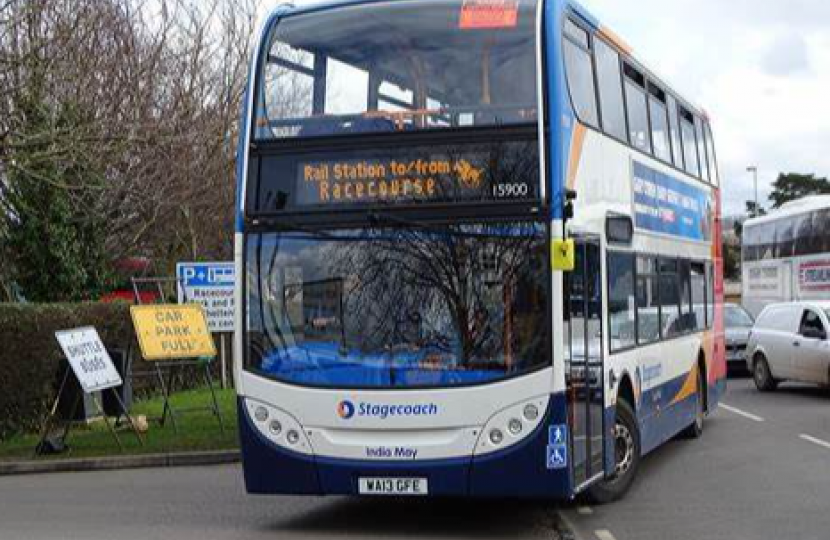 Thank you for your email which I have read with care. I entirely share your concerns about Stagecoach’s decision to make changes to some of its services in Cheltenham.

Before turning to the specifics, may I set out some background:

The context, as you know, is that people in Cheltenham have been severely impacted by Stagecoach’s poor service in recent months. The delays, cancellations and disruption has been completely unacceptable and have resulted in people being late – or missing completely – school, work and important medical appointments.

As you may be aware, over recent months I have raised my concerns with Stagecoach, the Department for Transport and Gloucestershire County Council on a number of occasions. In response to my calls for Stagecoach to surge resources to Cheltenham in December 2021, Stagecoach agreed to send drivers to Cheltenham ‘on loan’ from Oxford, as well as employing 150 new Gloucestershire based drivers by the end of January 2022.

However, this didn’t solve the issue. The service was still not satisfactory. So I called a further meeting with Stagecoach in the summer. I was clear with the Chief Executive that Stagecoach's bus service in Cheltenham was not performing at the level people rightly expect and that too many local people are being let down by buses that were either late - or didn’t arrive at all. I made clear to the Chief Executive that Stagecoach needed to ensure that the routes they were operating were properly staffed.

I also spoke informally to Stagecoach drivers who I met in the Prom or elsewhere to get their perspective. Although a variety of issues were raised, one consistent theme appeared to be that since Covid the volume of passengers in Cheltenham have dropped. That observation is consistent with wider survey data here in the UK – and indeed around the world. According to this independent study, passenger numbers are down 20-30%.

As you know, Stagecoach have now published an action plan detailing how they will improve reliability and capacity on Cheltenham's bus routes. Announcing the plan, Stagecoach West managing director Rachel Geliamassi has said:

“We know how important local bus networks are in connecting people to jobs, education, and skills, as well as ensuring access to key public services.

"Most of all, our customers want the certainty of knowing that the services we show in our timetable will be running reliably each day.

“The continuing impact of the pandemic on sickness levels, as well as the economy-wide skills challenge has meant that some services have had to be cancelled at short notice. More widely, the pandemic has accelerated changes in when and how people travel.

“We have completed an extensive network review and engaged with Gloucestershire County Council to plan a new network that we can deliver consistently, day in, day out.

“Most services won’t change, but we have had to make some difficult decisions to match our resources to the current level of demand. This will mean we can deliver a more reliable service for customers and make it easier for them to plan their journeys.”

What does this mean for Cheltenham?

Stagecoach’s plan to deliver a more reliable service includes changes to some of the routes here in Cheltenham. Having studied the map personally and with care, my view is that some have an element of logic, but others do not.

Some of the key changes proposed are as follows:

A minor change to frequency in the evenings following analysis on the times our passengers are travelling on this service.

This service will go via Cheltenham General Hospital (see F)

A minor change to frequency in the evenings following analysis on the times our passengers are travelling on this service.

Service D will operate a revised route in Bishops Cleeve and run up to every 20 minutes. There will be improved connection times with trains from London Paddington in the evenings.

Service E will be withdrawn, meaning we will no longer operate a service to Woodmancote.  This service was a commercial venture that was introduced in 2018, with passenger boardings on this farestage only averaging 58 per day, and current levels are less than 24 per day.

The revised D route will be serving the stop on Linworth Road, which is adjacent to a public path to Woodmancote and was the historical stop for those travelling to/from Woodmancote prior to 2018.

We will be withdrawing this service. This route was acquired in January 2017 and currently each bus on this route carries around 168 passengers each day, for context, each bus on service A carries 305.

We will be re-routing service B so that a 30 minute service to Cheltenham General Hospital is retained, with journeys on service B operating later into the evening meaning that there is better connections during visiting hours at the hospital.

Service 66 will continue to serve Bath Road shops, service A also serves Coronation Square, and many stops on service A and service D are within only a few hundred metres from many of the stops on the western end of service F, reducing the impact further for a lot of the community.

Gloucestershire County Council have put a replacement weekday service out to tender.

We will be withdrawing this service, which is run under contract with GCC.  This service carries around 63 passengers per day, with most stops coming within a few hundred metres of stops on service D or 94.

We have withdrawn Service 93 as a final part of the necessary steps to rebalance our resource to the right size network.  93 has had one of the worst post-Covid declines in demand (a theme that we have seen at many Park & Ride sites), and the ongoing works at Arle Court  have deteriorated this further.

Gloucestershire County Council have put a replacement service out to tender.

We will be using one less bus than is currently used.

From 27th November we will stop serving Arle Court P&R stop on service 94. We will continue to serve the Arle Court bus stop on the A40 (next to the film studios).”

I recognise that the changes outlined above will be concerning for a number of residents and I have asked Stagecoach to publish more information on the alternative routes that those affected will be able to use instead.

I am particularly concerned about the withdrawal of Service F and I have raised my concerns with Stagecoach directly. They have responded to me as follows:

“The majority of stops (66%) will still be served or will be within 300 metres of an alternative bus service, including our service A, service B, service D and service 66 (depending on where they're travelling from). At the same time, we will also be making a change to our Service B route so that it serves Cheltenham General Hospital, retaining a bus every 30 minutes during the day and with later journeys available than the current F offers. The timetable at weekends will be unchanged at this time.

Gloucestershire County Council have put a replacement weekday service out to tender.

For passengers on Leckhampton Road, the closest options are either service 10 (walking through Moorend Park Road), service 66 on Bath Road, or services P and Q on Old Bath Road / Charlton Road.

For passengers on Devon Avenue, the closest options are either service D on Gloucester Road or service A on Arle Road.”

This is not acceptable to me. 300 metres is simply too far for many bus users, and effectively leaves a key arterial route (Leckhampton Road) without an adequate bus service. Stagecoach inform me that GCC have put a replacement weekday service out to tender and it is expected that this route will be picked up by another provider:

Given the very significant public money that has gone into Arle Court, I understand people’s concerns about its future. GCC have confirmed to me that they have issued a tender for a replacement service as the Park & Ride forms a key part of the transport strategy for Cheltenham.

GCC stated that market testing has already been completed and a full procurement process is now underway. They expect to have the results of the procurement effort by early November.

As you may be aware, Gloucestershire County Council have reported Stagecoach to the Traffic Commissioner. I will ask my office to update you on the outcome.

Meanwhile, GCC are inviting feedback on these changes and you can submit your thoughts through the following link: Stagecoach service changes | Have Your Say Gloucestershire (engagementhq.com)

I remain committed to ensuring that all my constituents are able to access a reliable and affordable public transport and I will continue to work constructively with both Stagecoach and GCC as they work to deliver a more reliable service for Cheltenham.

On the broader point, the Government’s new bus strategy is the most ambitious shake-up of the bus sector in a generation, which will see lower, simpler flat fares in towns and cities, turn-up-and-go services on main routes and new flexible services to reconnect communities. Backed by £3 billion, this strategy will deliver better, more reliable bus services for passengers, strengthening communities and sustaining town centres across the country.

As part of this, at the last Autumn Budget the then-Chancellor committed £1.2 billion for bus transformation deals to deliver London-style services, fares and infrastructure improvements. The Budget also confirmed a further £355 million of new funding for zero emission buses.

Meanwhile, the National Bus Strategy is intended to place a range of new measures, including hundreds of miles of new bus lanes, simpler bus fares with daily caps, more services in the evenings and at the weekends, all buses to accept contactless payments, and greater integration of services and ticketing across all transport modes.