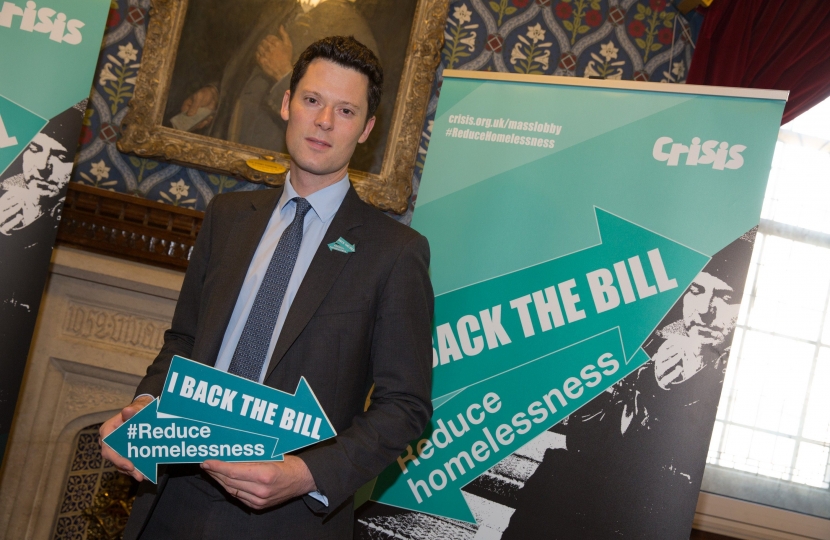 Alex Chalk, MP for Cheltenham, has backed a new bill to help tackle homelessness during a crucial vote in Parliament.

Proposed by Bob Blackman MP and supported by homelessness charities including Crisis, the bill could transform the help available to homeless people in Cheltenham and right across the country. However, if fewer than 100 MPs had attended the debate, the bill could easily have been blocked, making support from MPs like Alex critical.

Homelessness is rising, yet the law as it stands means that homeless people who approach their council for help can be turned away to sleep on the street. If passed, the new law would help to prevent people from losing their home in the first place and make sure all homeless people can get help when they need it, whilst continuing to protect families with children from homelessness.

The bill has the backing of the Government, the opposition and the CLG Select Committee following an in-depth inquiry.

Speaking about the Bill, Alex said: “This is about basic social justice. Nobody should be forced to sleep rough because they can’t get the help they need, not in Cheltenham nor anywhere else.

“I’ve personally heard from local constituents who were unable to get help when they became homeless. It’s time we took action. We need to make sure that anyone facing homelessness can get help, ideally before they actually lose their home. That’s why I’m backing the Homelessness Reduction Bill put forward by Bob Blackman MP, and I urge my colleagues on both sides of the house to offer their support as it moves through parliament.”

Crisis Chief Executive Jon Sparkes said: “This is a landmark moment, and we’d like to thank Alex for backing this unique bill. We still have a long way to go before it becomes law, but we’ll be there every step of the way to help make sure it happens.

“We have the momentum and we have the cross party consensus, and today’s success shows what can be done when people come together to help tackle homelessness. Yet this is no time for complacency. We must continue to build on what we’ve achieved today, both to get the bill through parliament and to make it work for homeless people if and when it finally becomes law.”