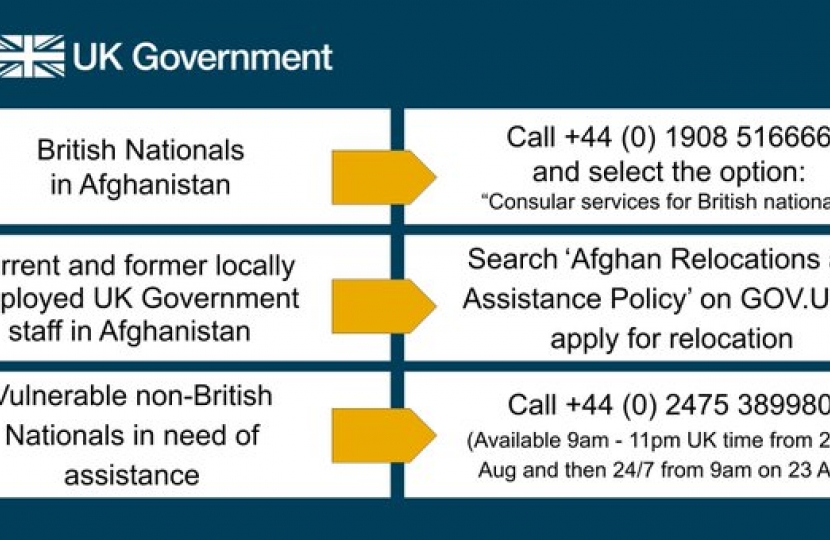 The humanitarian crisis in Afghanistan continues to dominate this week, and in my Cheltenham office we’re doing everything we can to get eligible individuals out. After discussions with MOD ministers, I wanted to provide an update. The key points are as follows:

Second, the flow at EHC is much better now that the Taliban have pushed their outer cordon further from Barons Hotel. They are also marshalling people into separate UK/US queues. The US scheme is clearly much bigger than everyone else’s, so this is making a big difference to size of crowds (and risk of crush) on our side.

Third, RAF planes coming in from Dubai are not coming in empty. They’re bringing in water, rations and comfort packs so we can try to alleviate some of the humanitarian issues being seen in the crowds.

Fourth, ‘Pen’ Farthing’s staff have been cleared to come forward, and the Defence Secretary has authorised MOD staff to facilitate their processing alongside other eligible personnel. If he arrives with his animals, we will seek a slot for his plane.

Fifth, the sad reality is that some of those screened and declared eligible for evacuation may not make it to the airport before the flights end. However, the end of the airlift won’t be the end of the resettlement programme. The MOD and Home Office are doing important work on Phase 2, to ensure there are other routes to the UK and alleviate some of the desperation in the queue.

The task has not been easy. Our troops have worked incredibly hard in extremely challenging conditions. I know the people of Cheltenham will join me in thanking them for the exceptional job they are doing.