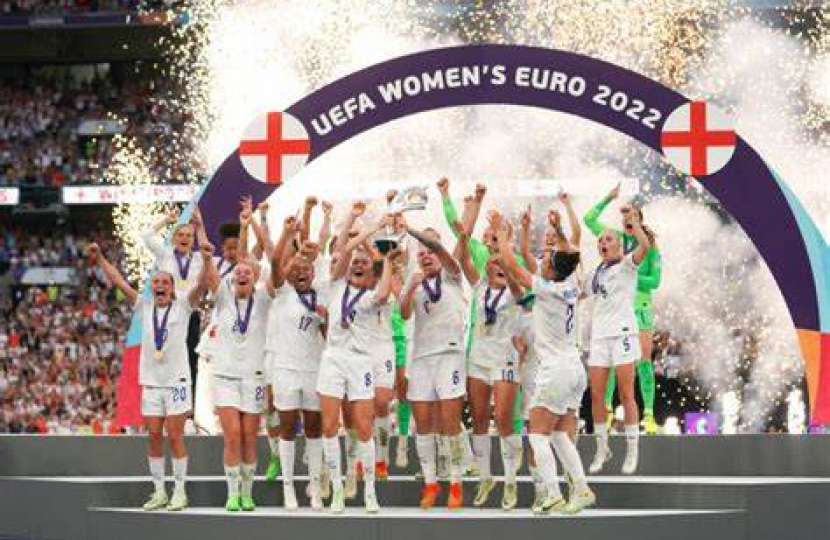 Like thousands in Cheltenham I cheered on the Lionesses, England’s women’s football team, as they won the UEFA 2022 final on Sunday. I watched the first half of the match in the Sandford Park Ale House, and nipped into the Retreat after a constituency meeting to watch the team lift the trophy after extra-time.

If the impact on my own girls aged ten and seven is anything to go by, this triumph will electrify girls’ football in Cheltenham. They and other youngsters have seen what is possible, and it will continue to inspire the next generation to success.

But without decent facilities, those seeds of enthusiasm won’t take root and flower. That’s why I am delighted that Cheltenham is benefiting from the Government’s £230 million investment to build and improve 8,000 grassroots football and multi-sport facilities by 2025.

Over £400,000 has already been spent on pitch and changing room improvements at Burrows Field to support Leckhampton Rovers FC, a community-led bid that I was delighted to champion with the Sports Minister directly. The funding will support the FA’s ambition for the tournament to create half a million extra opportunities for women and girls to play football.

More investment is coming. Over £500,000 has also been awarded to nearby Bishops Cleeve FC to support their major upgrade, including a new 3G pitch.

Sport is not a ‘nice to have’: it contributes enormously to health and wellbeing. With a recent survey of 8,000 British women by Nuffield Health indicating that around half had done no vigorous exercise in the last year, everything possible must be done to support women’s and girls’ sport in Cheltenham and beyond.

Who would you like to be the next Prime Minister?

Right Cheltenham - now that the last two have had their first head-to-head debate, which do you think would be the best PM?!

Do let me know via the attached survey. I’ll publish the results on or around 1 August.