My representations to the JCS Public Examination 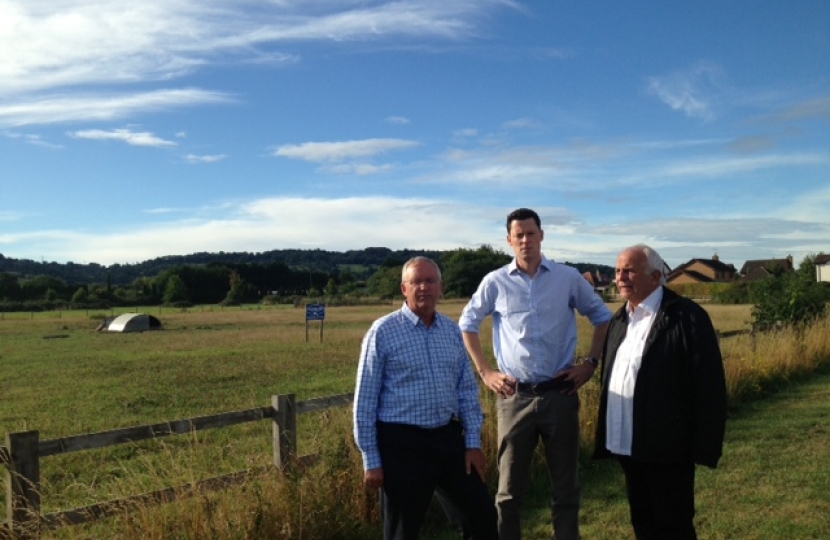 Representations by Alex Chalk MP to the Examination-in-Public – 19.5.15

What follows is a speaking note prepared for submissions made to the Inspector at the Examination-in-Public on 19 May 2015. It is not a transcript.

1.      Thank you for facilitating this slot for me at relatively late notice. Forgive me for not being able to be here for every day of this EIP, but other public duties make that impossible. I am grateful for this chance to address you.

2.      My representations are non-party political. May I prolong the spirit of coalition, even if only here in Cheltenham. Martin Horwood speaks authoritatively on this issue. I respect his views, and I hope they will be given significant weight.

3.      In the time available, I would like to make some general remarks before then adding one or two specific points.

a.       Cheltenham needs more housing – particularly housing which is affordable, as well as social housing

b.      Cheltenham needs a Joint Core Strategy – to ensure that development takes place in an orderly and structured way

c.       However, it needs a JCS which strikes the right balance and ensures that the sheer number of homes built does not destroy the very environment that make this town (and indeed county) an attractive location to live in the first place.

5.      My central representation is as follows: I do have serious reservations about the sheer number of houses proposed by the JCS. I believe the figure is excessive and should be reduced. I further respectfully suggest that that excessiveness impacts upon the ‘soundness[1]’ of the Plan.

6.      That is not purely an instinctive view (although instincts can sometimes be useful in planning matters). In reaching my conclusions I have read with care the:

b.      The Chelt Alliance representations.

7.      I would urge you to give them the most careful possible consideration. None of the rebuttals I have seen, nor indeed the JCS Responses to your questions posed on 13 May, provide a persuasive answer to them. May I add that I find it surprising that it required your questions to tease out such important information so late in the day about the methodology applied to housing projections in the JCS.

8.      The concerns of CPRE and Cheltenham Alliance (which I share) about the housing projections in the JCS in its current form can be crystallised as follows:

a.       When the JCS authorities tinker with established methodology for making housing predictions, by and large it leads to numbers being revised in an upward direction

b.       When the JCS authorities encounter doubts about housing demand, again they tend to resolve them in favour of increasing the overall number of houses.

9.      In my view, on both scores they should do the opposite.  It is far easier to adjust up over the coming years than it is to adjust down. My clear view is that doubt should be resolved in favour of reducing the numbers, not increasing them.

10.  Moreover, a small error/miscalculation when multiplied over so many years (ie up to 2031) will have a dramatic impact on the character of this unique town (and indeed county), and also on the local population. Get the JCS right, and Cheltenham will flourish. Get it wrong, and our town will be changed irreparably for the worse.

11.  My core representation can be summarised in one phrase: if in doubt, deduct.

12.  One general representation if I may about the unique position of Cheltenham. In relation to Cheltenham, I would urge you to take the notional allocations between boroughs with a pinch of salt. They can be misleading.

13.  Cheltenham is only being said to be providing 9,100 houses [JCS, p.27]. But that is purely cosmetic and reflects an arbitrary boundary. The reality is that many more proposed houses will be tacked onto the town, and the impact will be felt here (with the attendant pressures on the hospital, transport network, schools). The fact that they may not have been allocated to the Cheltenham quota is nothing to the point.

14.  The JCS admits (p.31) that Cheltenham will accommodate about 10,655 new homes in total. So, for example, the number allocated to Cheltenham’s quota from N-W Cheltenham is 2,225 whereas the total number proposed to be built is 4,785. The impact of those 4,785 will be felt wholly or mainly in Cheltenham, notwithstanding that 2,560 are allocated to Tewkesbury (JCS, p.37).

15.  It is wrong to tinker with the established OAS methodology for population growth in a way that leads to the overall numbers going up. I am speaking of course about moving from the application of a 5-year historic trend period to a 10-year trend period for Sub-National Population Projections.

16.  This departure from orthodox methodology is something that emerged only after you had asked your recent probing questions.

17.  It is no answer for the JCS authorities to say ‘Well, we think London is going to spew out more people which the rest of the country will need to accommodate’ [See response to Inspector’s questions dated 13 May 2015]. There are so many things that could change over the coming months and years – the UK’s negotiation with the EU for one.

18.  10 years as a historic trend period is therefore no more helpful than five years. And yet it significantly affects the housing numbers. And as I’ve said before, where there is doubt, it should be resolved in favour of reducing the numbers – ie in this example, applying the reduced trend figures.

19.  I agree with CPRE’s analysis that it is unnecessary to increase the OAN by 3,800 dwellings in order to account for the nebulous issue of ‘Unattributable Population Change’. That is because:

a.       UPC is considered by credible commentators to be due to errors

b.      The ONS deliberately take no account of it [JCS Response to Inspector §10]

c.       Even the JCS authorities in their response to the Inspector’s questions stated that the question of whether to make an adjustment was ‘debatable’ [para 11].

20.  The effect of taking account of it (due to what I’ve called the multiplier effect) is significant. It adds an additional 11% to the proposed dwelling requirement in the JCS area (and an additional 25% of that increase proposed in the ‘major allocation’ sites). That is not a sufficient (or indeed ‘sound’) basis upon which to inflate housing figures by over 1,000 in Cheltenham and 2,000 in Gloucester.

21.  The accuracy of UPC is simply too questionable for it to be used as the basis for such a significant proportion of the housing projection. I simply don’t understand why the JCS authorities, having accepted that the question of whether to take account of it is ‘debatable’, then go on to say (para 10) that it would ‘positive and prudent’ to take account of it.

b.      Rising productivity trend – ie more economic activity is likely to be generated by fewer people as they live longer and remain economically active for longer.

24.  Finally, it is premature and unhelpful to make predictions about economic growth before an economic strategy has been drawn up. It is essentially shooting in the dark.

25.  Finally, it is not justifiable to add a 5% ‘buffer’ for an historic undersupply. The McDonald/Whitehead report has concluded that there is no evidence of meaningful undersupply (when you strip out the UPC element). Careful regard should be given to that.

26.  Instead, however, once again where there is doubt it has been resolved in favour of increase. In my view it should be precisely the opposite.

27.  In summary then, I believe it is unsound to inflate the baseline ONS demographic projections.

28.  The JCS report (p.28, §3.1.9) states that the baseline demographic projections would support the need for 28,500 dwellings. This iteration of the JCS goes significantly beyond that, for some of the reasons I have just referred to. It has done so because areas of doubt have been resolved in favour of upping the numbers instead than reducing them.

30.  Cheltenham is one of the best places in the UK to live, work and raise children. Get this JCS right and that is preserved. Get it wrong, and you lose the very combination which makes this town attractive in the first place. The stakes could not be higher.

31.  Those are my representations.

[1] A statutory threshold that the Inspector is obliged to consider