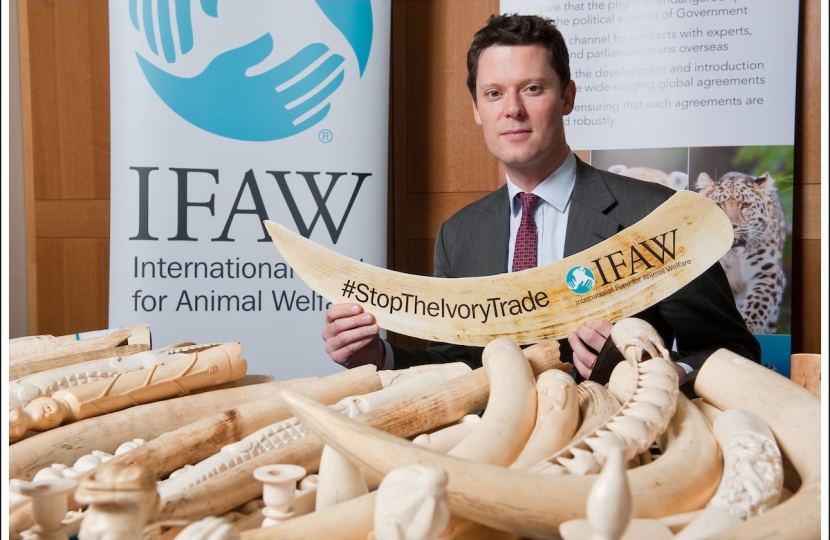 Alex Chalk MP has urged the Government to review the use of the UK’s international development budget so that it can support conservation of the world’s most endangered species.

Cheltenham’s MP, an active campaigner against elephant poaching, was speaking in Parliament during a debate on the Ivory Trade.  He challenged Ministers to broaden the Department for International Development’s (DfiD) “narrow focus” and use its “financial firepower” to “direct some of that money towards conservation”.

Alex Chalk told Parliament that it was time for the Government to be “bolder and more radical”. He explained “Elephants are in decline by 8% per annum: 55 elephants killed per day, 20,000 are being slaughtered every year for their tusks.

“We are allowed to use DfiD money to pay for peace and security-related costs, so why can we not go one step further? Why can we not use the excellent opportunity presented by the Ivory Bill to go further and to direct that money towards conservation? Let the moment start here. The Department for International Development should in due course become the Department for International Development and Conservation.​”

The Cheltenham MP’s call received support from a number of other MPs and Minister David Rutley agreed to raise the point with the Secretary of State.

Alex Chalk commented: “I welcome the Government’s decision to tighten the law on ivory sales. We should now use the DfiD’s financial firepower to tackle the demand that drives poaching at source.  The Government is spending £14bn every year. That budget could be used to protect endangered species and help local communities find long term alternatives to this illegal trade.”